The Telomere Effect: Taking Control of Your Cellular Aging

I just finished reading The Telomere Effect by Dr. Elizabeth Blackburn and Dr. Elissa Epel, and it was enlightening. The authors’ discoveries about how telomeres (the endcaps on our chromosomes) affect cellular aging are a major advancement in our understanding of health and longevity. Blackburn and Epel have summarized their research in this easy-to-read, empowering how-to manual describing exactly what to do in your daily life if you want to slow down the aging process and reduce your risk of disease.

In order to understand the important function of telomeres, it’s helpful to have a basic understanding of our genetic material.

DNA (deoxyribonucleic acid) is the hereditary material in humans and almost all other organisms. As you can see in the diagram below, strands of DNA are composed of nucleotides. A nucleotide is made up of a chemical base (adenine (A), thymine (T), guanine (G), or cytosine (C)), a sugar molecule, and a phosphate molecule. A gene is a distinct sequence of nucleotides. We’ll talk more about what genes do in the next section. 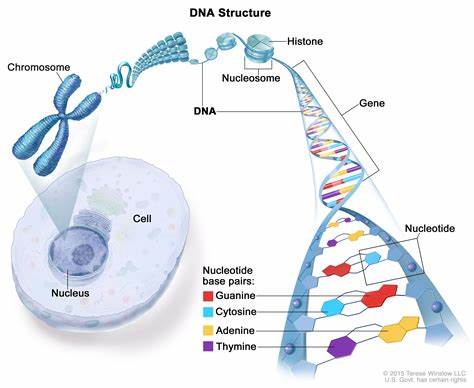 Many strands of DNA coil together to form a chromosome. Most of our chromosomes are located in the nucleus of our cells (called nuclear DNA), but a small number are also found in the mitochondria of our cells (mitochondrial DNA).

As you can see in the diagram below, telomeres are regions of repetitive nucleotide sequences at each end of a chromosome. Telomeres are often compared to aglets, the pieces of plastic or metal at the ends of shoelaces that keep them from unraveling. Telomeres provide critical protection for chromosomes during cell division. 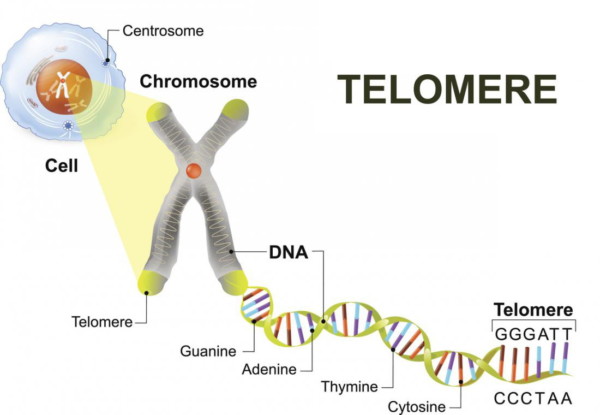 As the cells of our body divide and renew themselves, telomeres protect the ends of chromosomes and allow our genetic material to be copied correctly. But every time a cell divides, telomeres lose base pairs of their DNA. So as we age, telomeres tend to get shorter and shorter. When telomeres are completely worn away, chromosomes can break, fuse with other chromosomes, or mutate. This leads to cell dysfunction (disease) and cell death.

Our genes (distinct sequences of nucleotides) can determine certain physical traits over which we have no control, like eye and hair color. But only about 1% of our DNA is made up of these protein-coding genes; the other 99% of our DNA is noncoding. While noncoding DNA is still not fully understood, research shows that it plays a large role in regulating gene activity. So, one function of noncoding DNA is that it determines when and where genes are turned on and off.

For many years scientists believed that our genetic material predetermined our biological fate, but it turns out that this isn’t the case. Most of our biological functioning is influenced by many different genes as well as the interaction between our genes, physical environment, lifestyles, social relationships, and how we react to the events in our life. We may be born with a genetic predisposition toward a certain physical trait, condition, or disease, but environmental and lifestyle factors often determine whether or not the genes involved get expressed. Blackburn and Epel include a great quote from obesity researcher Dr. George Bray: “Genes load the gun, and environment pulls the trigger.”

Lifestyle and environment can determine whether or not genes get expressed, and they can also cause our genes to mutate, leading to disease. For example, many cancers are caused by genes that have mutated either randomly or as a result of environmental exposure to a toxic substance like cigarette smoke, red and processed meats, or dairy. Chronic stress can also cause genes to mutate, leading to inflammation and disease.

Protecting our telomeres (keeping them as long as possible) so that they can protect our chromosomes is key when it comes to preventing disease and slowing the aging process. As Blackburn and Epel have found in their extensive research, some of the lifestyle and environmental factors that shorten our telomeres are:

Telomerase: The fountain of youth?

In 1984, Elizabeth Blackburn and Carol Greider discovered telomerase, an enzyme that makes and replenishes telomeres; it restores the DNA that is lost during cell divisions. Blackburn and Greider, along with Jack Szostak, were awarded the 2009 Nobel Prize in Physiology or Medicine for this discovery. In laboratory experiments, telomerase not only slows or prevents telomere shortening, but can actually reverse it—making telomeres longer.

This exciting discovery led to the question: Can we take a pill of telomerase to prevent aging and disease? Unfortunately, the answer is no. Our naturally-produced telomerase is best for telomere health. A high level of artificial telomerase could actually increase the risk of cancer, because telomerase can allow cells to keep dividing unchecked.

Throughout The Telomere Effect, Blackburn and Epel provide many self-assessment tools and extensive guidance on how to improve the health of your telomeres by making adjustments to your lifestyle and environment. They summarize their advice in their “Telomere Manifesto” at the end of the book. Some of their advice includes:

None of this advice is surprising; however, when research shows how these lifestyle factors affect us at a cellular level by speeding up the aging process and increasing our risk of disease, we’re more likely to take them seriously. I find telomere research incredibly empowering—it shows exactly how our daily life affects our aging process. If you’re interested in learning more, I highly recommend reading The Telomere Effect.