If You Have Osteoarthritis, Here’s How to Give Your Cartilage the Best Chance to Heal

Osteoarthritis is a painful, debilitating condition that affects millions of people around the world and puts a significant drain on our healthcare system. More than 32 million Americans live with osteoarthritis, and the condition affects approximately 9.6% of men and 18.0% of women over age 60 worldwide. In the U.S., insurance companies spend $149.4 billion per year on medical costs for osteoarthritis, and annual out-of-pocket expenditures are $36.1 billion, for a total of $185.5 billion.

As the efficacy of hip and knee replacements improves, rates of joint replacements continue to rise—especially in younger demographics. The National Center for Health Statistics found that between 2000 and 2010, the number of hip replacement surgeries in people ages 45–54 more than doubled. Scientists are also making great strides in discovering how to repair and grow cartilage more effectively, developing biotechnology that will ultimately reduce the need for joint replacements.

These advances in medical technology are welcome because they reduce chronic pain and improve function for millions of people, but unfortunately they don’t address the underlying cause of osteoarthritis. They also substantially increase medical costs and fuel a mentality that our bodies will inevitably break down, but that’s no problem—we can just get our joints replaced!

We should not be pushing our bodies until they break. Osteoarthritis is almost always preventable or manageable with self-care and regular, moderate physical activity, so we have an enormous opportunity to reduce chronic pain and healthcare costs by taking this condition into our own hands. In this post I’ll talk about the symptoms, risk factors, and cause of osteoarthritis; how cartilage repairs itself; and how to best take care of yourself in order to let your joints heal.

Osteoarthritis occurs when cartilage, the connective tissue that protects the ends of your bones, wears away. This gradual breakdown can occur in any joint, but most often affects the parts of the body that bear weight and get used the most: the hands, spine, hips, and knees. As cartilage gets worn away, joints become stiff and painful, and bone rubbing against bone can cause deformity of the joints.

Your doctor may use an x-ray or MRI to look for signs of osteoarthritis, which include: 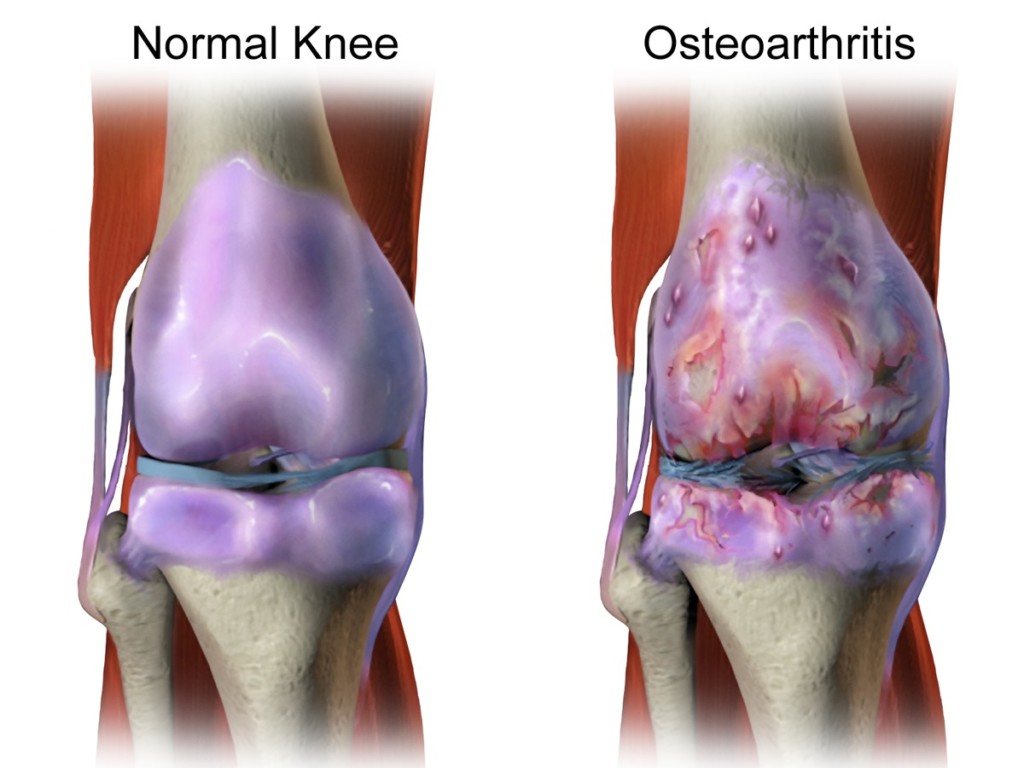 Symptoms of osteoarthritis include:

The cause of osteoarthritis: Habitual posture and movement patterns

If you maintain healthy, balanced posture and movement throughout your life, you should suffer little joint degeneration. The problem is that because of muscle memory—the automatic way our nervous system learns and remembers muscular patterns—we tend to build up chronic muscle tension and gradually adopt dysfunctional posture and movement habits over time.

When joints are misaligned or compressed by tight muscles, more pressure is put on cartilage than it is capable of withstanding. Excess pressure is also put on cartilage when we overuse a particular joint, which often occurs in sports training or repetitive physical work. Cartilage gradually breaks down under pressure as we misuse and overuse our joints.

When cartilage breaks down, cartilage cells are damaged. Our immune system does not discriminate between physical trauma and infectious invaders. When either of these threats is perceived, the inflammatory response kicks in to remove harmful stimuli and begin the healing process.

Inflammation that occurs immediately after an injury, called acute inflammation, allows damaged cells to be removed from the area and initiates the healing process. But chronic, localized inflammation can occur when we’re constantly damaging our cartilage. It will continue as long as the source of the problem—the habitual movement pattern that damages the cartilage—is present.

You may hear osteoarthritis referred to as arthrosis or osteoarthrosis. These terms describe joint degeneration resulting from wear and tear without the presence of inflammation.

Once joint protection is gone, our bones try to protect and stabilize joints by becoming thicker and growing bone spurs and cysts. All of these changes typically cause pain, inflammation, and limited movement. Muscles surrounding the painful joints tighten reflexively, worsening the condition by limiting range of motion.

These painful, structural changes are preventable virtually all of the time, and very often reversible when osteoarthritis is mild to moderate. You simply need to give your joints a chance to heal.

Cartilage can heal—if you give it the chance

Your cartilage constantly grows and maintains itself throughout your life. It was long believed that cartilage had a limited ability to repair itself because chondrocytes, the cells that produce and maintain cartilage, could not migrate out of their designated area. However, recent research has shown that chondrocytes actually can migrate, more or less depending on the specific situation and environment.

And in 2019, researchers from Duke University in North Carolina and Lund University in Sweden published a fascinating study in which they measured protein turnover in articular cartilage in human hips, knees, and ankles. They found that human cartilage has a greater innate ability to regenerate itself than previously thought. Their findings show a potential link to a capacity “for regeneration that might be exploited to enhance joint repair and establish a basis for human limb regeneration.”

There is still much to be learned about cartilage, but it’s clear that it has greater ability to repair itself than we thought—we simply need to give it the chance.

There are two factors that get in the way of cartilage healing, one of which we can’t change, and one that we can.

First is the fact that most cartilage does not have a blood supply of its own, so it relies on the pumping action from joint movement to diffuse blood and other nutrients through joint fluid. Too much compression and too little compression both spell trouble for cartilage; it needs a moderate amount of movement, involving regular loading and unloading of weight, to remain healthy.

Due to the indirect way in which cartilage receives nutrients, its healing process is fairly slow. And if cartilage repair can’t keep up with the rate at which you do damage, cartilage will continue to get worn away until it’s gone for good.

The second hindrance to cartilage healing is the fact that most people don’t know exactly what to do in order to most effectively let their cartilage repair itself. Many people are willing to rest their joints in order to let them heal, but rest alone does not fix the underlying problem of habitual body use.

In order to change the deeply learned muscular patterns that dictate your posture and movement, you must retrain your muscle memory using neuromuscular education. Exercises that use pandiculation to release subconsciously held muscle tension allow you to even out imbalances and restore natural, efficient body use. You can stop putting unnatural pressure on your joints by retraining your posture and movement with very slow, gentle Clinical Somatics exercises.

As you release your tight muscles and change your habitual patterns, you can also begin a gentle strengthening routine in which you repetitively load and unload your joints, very gradually increasing weight over time. This should be done under the supervision of a qualified physical therapist.

How to move forward in your healing process

There are five steps you should take when trying to heal osteoarthritic joints:

1. If a certain activity caused your joint damage or makes it worse, stop or significantly reduce the activity while you heal. Your cartilage cannot heal itself if you keep damaging it.

2. Practice Clinical Somatics exercises on a daily basis. The exercises release the chronic muscle tension that compresses joints, and allow you to retrain imbalanced posture and movement patterns that put unnatural strain on joints.

3. When you’re ready, practice a gentle strengthening routine in which you repetitively load and unload your joints, very gradually increasing weight over time. This should be done under the supervision of a qualified physical therapist.

4. Lose weight, if necessary. Research shows that obesity increases risk of osteoarthritis by putting pressure on joints and also by increasing inflammation throughout the body.

If you have a joint replacement or cartilage transplant, you should support your recovery by practicing Clinical Somatics exercises. The exercises will speed your recovery, release your chronic muscle tension, restore natural posture and movement patterns, and prevent future joint damage.

Always pay attention to warning signs of osteoarthritis, like crunching sounds and pain in your joints. Allowing your cartilage to heal is much easier early on in the process than it is after significant damage has occurred.

Osteoarthritis does not have to be an inevitable part of the aging process. We have a tremendous ability to prevent and manage it with self-care, and by doing so we can reduce worldwide pain and suffering as well as healthcare costs.