My Journey to Hell and Back

In 2003, I was in my early 20’s. I weighed 150 pounds and was in phenomenal shape. I had no history of back issues and was leading a normal life.

One day I was doing some landscaping at my parents’ house and decided to go full superman while creating a rock staircase. I was at the bottom step, and knew I needed a big base. So I chose a rock that was way too heavy and decided to just go for it. That’s when I heard the pop. The first pop that changes our lives as back pain sufferers.

I immediately went into pretzel mode and started walking crooked (we all know that walk, where you’re leaning way to one side like the guy from the old V-8 commercial because you’ve just done some major damage). Your first disc herniation is always something you remember, because everything goes back to that.

Five days later after some bed rest, I was completely back to normal. But a few years later, in 2005, I was on one of my daily jogs and started feeling tightness in my glute/lower back area. It pissed me off. So I did what many people do and went to a chiropractor.

The chiropractor gave me what we’ve all received: the normal treatment plus exercises for stretching those muscle groups. Of course none of it worked. The sad part is, in hindsight—it was such minute, treatable pain. But of course when you’re new to it you don’t understand that. You just want it gone.

My next visit to the chiropractor didn’t go so well. Using the force of a giant weight lifter/military doctor (which he was), he shoved so hard at my lower back that he sent me into the worst pain imaginable. I screamed so loud the patients and staff in the waiting area stood up. I know this because my mother was there waiting for me.

I can’t remember much of this, but she ran in and the chiropractor had me kneeling on a wheelchair, completely twisted so I was facing sideways, knees against the back, because it was the only way I could be without passing out. He’d severely ruptured my disc and left me a present… Cauda Equina. Awesomesauce.

The stand-up doctor that he was, he then had my mom pull around back so I could be wheeled into the parking garage, though the back door, so his patients wouldn’t see what he’d done to me. A few hours later I was in emergency surgery with a neurosurgeon having a laminectomy. I could have been paralyzed from the waist down.

I woke up from that feeling free, like everything had gone back to normal. But my follow-up visit with the neurosurgeon wasn’t what I wanted to hear. “You’ll have issues for the rest of your life. No more running, no tennis, no this, no that.” No one was gonna tell me that.

After healing from surgery, I continued to live my life. For two whole months. Then the back zaps, lightning strikes, and painful sitting started, among other things. It wasn’t too bad, I thought, it’ll just end at some point. Unfortunately that also got my mind into the “I have a bad back, I can’t do X” mentality. So I became a lot less active. I was 27, and I’d already been mentally defeated even though I hadn’t realized it yet.

This began the real portion of the program. Living with this shit. I sat a lot, laid down a lot, didn’t participate in a lot, and worked on work. I “slipped” discs a lot, drank a lot, and began my opioid journey. AKA every doctor in America’s way of handling failed back surgery. They must have a handbook, because I fell right down every step. When I had an episode it was two weeks in bed, some extra pills, and I was usually back on my feet…well, enough to do what I needed anyway. Living in pain sucks and you forget what it is to live without it.

This revolving door lifestyle went on for the next decade. I gained 50 pounds and my life was work, bed, and a bar a few nights a week to numb the pain. And lots of pills. I threw in weekly Airrosti sessions and a gentle trigger-gun chiropractor every week. Yes, Airrosti every week for five years straight—I am by far their most tenured client across the US! I was scared of everything else. And I’d actually convinced myself this was okay.

Then the crash happened. In June of 2021, I had a flare-up. So I did what I always did and laid down, took meds, and waited. Except it never went away. It got worse. I had a session with a gentle yoga practitioner, my Airrosti, and chiro weekly. Along with multiple powerful meds that I’d now become so accustomed to that getting off of them wasn’t in the cards. I was literally stuck.

My muscles proceeded to stop working. I was having to be carried and put in a backseat laying down to go anywhere. I went to see every type of doc in the book for this…they all said the same thing (including my PT’s)….”You happen to fall into a gray area that science/medicine hasn’t caught up with.” Again, awesome.

The dark months praying this would go away just got darker. Day after day, slithering my way to the bathroom and back to bed. Great way to live. I just wanted my previous life (the one where I still didn’t do shit but was able to work at least) back. So my pain management doctor recommended a spinal cord stimulator. What she called “last gasp, this is all there is left to do.” It was scheduled for trial in November and full implant early December.

I wanted it to work so bad that I told them the trial worked, because again I wanted to believe it would…and that I needed to give it a chance. But it didn’t. None of it did. I’d spent $100K on medical services in 2021 and none of it did a thing.

Come January I was starting to think of other options, like checking out (not the first time this had crossed my mind during this ordeal, but I was being backed into this by my body). I wasn’t gonna live this way anymore. If my parents came over they had to just sit next to my bed and eat on a tray. If I got up my right hip wouldn’t support me so I had to be carried.

Everything was pain. There were no dinner plans, holiday plans, or any plans. Bed. That was it. I crooked to the right so bad that just getting on the toilet took an extra person. I was done. I’d given up. For the last few months I’d found myself stretching my right hip every five minutes just to get a hint of relief. My hip flexors were growing knots.

All this time I’d been looking for something, anything to help. I read countless articles and watched endless YouTube videos on how to fix my condition, and none of it did anything. Some made it worse. Then one day in February everything changed. I came across Sarah’s video titled “Why Stretching Doesn’t Work.” The title alone sang to me. The video made sense too, but then again, a lot of them did. Hope wasn’t a thing I had much of anymore.

But, I’d tried everything else. So, why not….couldn’t be any worse off than I already was. I found the Arch & Flatten and Iliopsoas videos on the Somatic Movement Center YouTube page. After doing each a few times, my hip pain, just one of many pains, went away for HOURS. I immediately ordered the Level One Course.

After a few days things had improved so much I cannot even describe it. And it wasn’t just pain. I was CALM. Before I was an inflamed wreck. Fifteen minutes of Arch & Flatten alone put me in a zen-like state. That’s something yoga never did. I felt hope. I felt at ease. Just seven, that’s right seven, weeks later I can say I’m 95 percent pain-free, and the rest I know will be gone soon.

My body has changed so much. I feel things I haven’t felt in decades. Like how walking is SUPPOSED to feel. Or sitting up. Or sitting down. Or standing. I could go on. My pain management doctor would not even give me trigger point injections when I just saw her because I didn’t need them. She was awestruck at how my muscles had moved. My chiropractor has no clue how I’ve melted back into correct posture and why I’m so easy to adjust now, or should I say how easily my body accepts manipulation. I won’t need either of these things soon and I know that now.

My wife cannot believe what’s happened or how I’m so straight now. My mother commented that I seemed to have grown….the tears that run down her face from her kid not being in pain anymore make me work harder and practice even more diligently. And boy do I practice…because A) IT ACTUALLY WORKS and B) I absolutely love the way it makes me feel.

Two months ago I feared a five-minute ride to the airport because sitting down would put me in a world of hurt. Ten days ago I took a trip to Mexico City and had no real issues. Miracle. That’s the only way to describe Sarah and Somatic Movement Center. I’ve ordered Level Two, but am really concentrating on perfecting all of the Level One exercises first before I start.

I don’t know where this all ends, but I know that I’ve got my life back. I can only imagine how I’ll be feeling in another few weeks/months. From the bottom of my heart and from my entire family, thank you Sarah. We/I will forever be indebted to you. 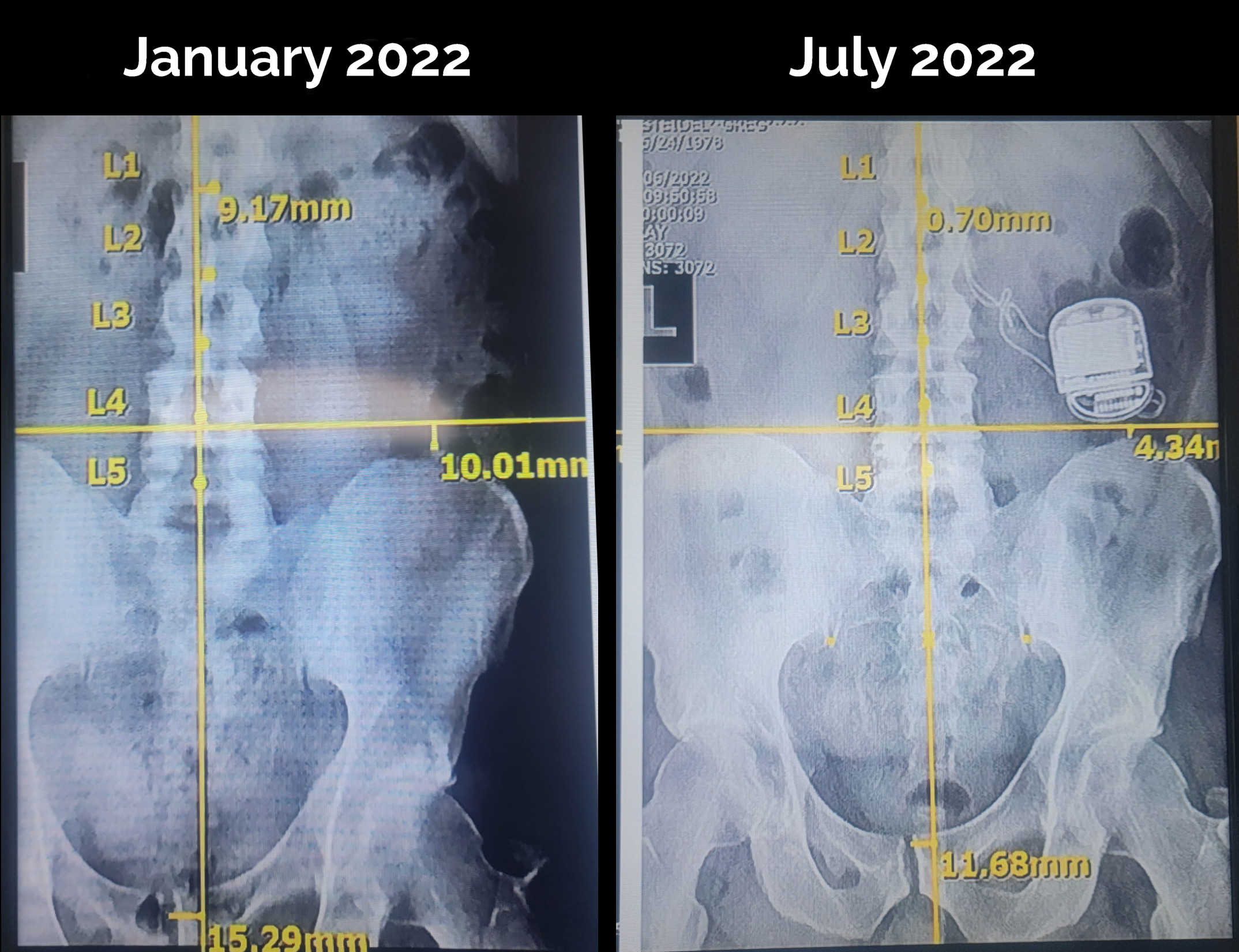