Many students ask me how to breathe correctly when practicing Clinical Somatics exercises. Your breathing pattern is more important in some exercises than others, depending on whether or not the exercise includes extension or flexion of the spine.

What is diaphragmatic breathing, and why is it so important?

As you can see in the diagrams below, the diaphragm is an umbrella-shaped muscle located just below our lungs. In diaphragmatic breathing, we contract our diaphragm, pushing its center downward and inverting its umbrella shape as we inhale. This action draws air into our lungs and makes our belly expand. Then as we release our diaphragm, the muscle relaxes upward and expels the air out of our lungs.

Diaphragmatic breathing occurs naturally in all mammals when we are in a state of relaxation; this type of breathing is known as eupnea and requires no conscious effort. 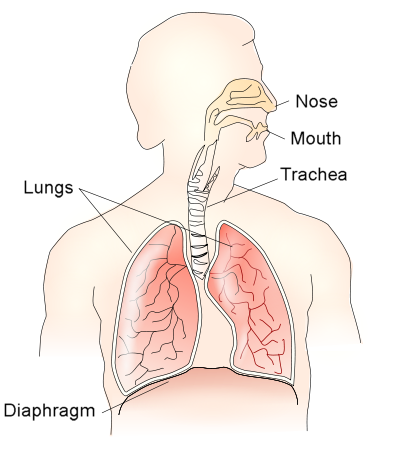 Another reason people tend toward shallow breathing is the desire to not stick their belly out and appear overweight. The idea that we should suck in our stomach is so ingrained that it affects our breathing without us being aware of it. Many people have unnecessary tension in their abdominal muscles as a result of holding their stomach in so often, and this tension prevents them from taking full breaths.

The good news is that you can train yourself to breathe diaphragmatically pretty much all of the time. It just takes practice, like any muscular skill. The more often you practice diaphragmatic breathing, the more habitual it will become—and the more relaxed you’ll feel.

Close your eyes. Visualize your diaphragm inside you, just below your lungs. Completely relax. As you inhale through your nose, visualize the air going down to your lungs, and your diaphragm pushing downward. Be aware of your belly expanding at the same time. Then slowly let your diaphragm relax upward, as you slowly exhale.

The more often you practice this exercise, the more aware you will become of how you’re breathing. Soon, you’ll notice when you’re breathing shallowly because it will feel wrong, and you’ll instinctively slow yourself down and return to diaphragmatic breathing.

Arching and flattening: Natural extensions of inhaling and exhaling

So, the first guideline to breathing in Clinical Somatics exercises is that you should breathe diaphragmatically. The exercises will be most effective if you are completely relaxed and not holding your breath.

Here’s why: Extension and flexion of the spine are natural extensions of the movements of inhaling and exhaling.

When you inhale, your diaphragm moves downward and your belly expands. If you are relaxed, you should feel a gentle, natural extension or arching of your spine as you inhale. When you want to take a really deep inhale, you may actively arch your back to create more space in your chest and abdomen.

When you exhale, your lungs empty and your belly returns to normal. If you want to expel the air from your lungs more completely or forcefully, you can contract your internal intercostals and abdominals to reduce the space in your chest and abdomen.

Let’s start with the Arch & Flatten:

The same pattern applies to the Side Curl: